On tonight’s game:
“Well first of all a big thank you to that crowd. Amazing. Especially when things didn’t really go so well, they were behind us. They were cheering for the team and that’s exactly what we need. It’s not going to be all easy. It was a very tight game. It was what we expected. It was a very good Honduras side that knows how to play and knows how create chances and knows how to create problems, and that’s what they did. Still, we came out with three points and with a very good start into this Gold Cup. So a lot of positives definitely to take as well. A great atmosphere and a very special moment for Michael Bradley with his 100th cap, so big congratulations to him from the entire team.”

On if there’s still a competition for positions:
“It’s going to be a journey. We know we’re going to improve from match to match. It was clear that it’s not going to be perfect in the beginning. There’s going to be moments with a little struggle that we’ve got to go through, tense moments. They will make some mistakes, but in the tournament they’ve got to move on right away. We’re going to talk about it tomorrow and then we’re in Boston and then already we’ve got to ready for Haiti, who I think surprised a lot of people today with their game against Panama, so that will not be an easy one either. Hopefully from game to game we get more in a flow and more in a rhythm and we’re going to start to fine-tune elements. It was tricky getting everybody on the same page, so it takes maybe a couple of days, but we will improve with everything.”

On the play of his team:
I think for the first couple minutes we came out good, but then really they took over the first 15-20 minutes. You’ve got to give them a big compliment the way they played it there. They created chances and we kind of had to come back into that game, especially our back line. Both center backs need to kind of settle. We told them to just be calm, to keep it simple and nothing complicated, but find your rhythm. I think the second half was much, much better. You’ve got to give Honduras a compliment for how they played. Those first 15-20 minutes they played really good soccer.”

On the importance of set pieces:
“They are tremendously important there’s no doubt about it, but we always said that. I experienced it for myself when I coached in the World Cup in 2006 with Germany. Italy won the World Cup on 70 percent set pieces. Did they play the most beautiful soccer in that tournament? You can answer that one, but it is something that you have to train. It’s something that you have to believe in. It’s something that you have to be really determined in and we train that. The last couple of days we’ve done that. Every time we’re in camp we try to figure out some new elements and hopefully give the opponents a surprise with it. But you also need the players that are convinced to go in for these balls and be really hungry for goals because it’s a physical battle that happens at every corner kick and every free kick and I think we have there a really strong 11 in our team.”

U.S. forward and Budweiser Man of the Match CLINT DEMPSEY (who socred both goals)

On the goals tonight:
“Any time you can score a goal it always feels good. The first goal was maybe a little bit lucky because the ‘keeper made the save and it came to me and I was able to get my jaw on it. but I just happened to be right in the right place. The second goal was just a good ball in from Michael and I wasn’t really being marked and I was able to get a good look on goal.”

On if the heat is off him now that he isn’t captain, or if he played differently tonight”
“No, I always approach the game the same, just go out and try to help my team win. It’s the same situation in Seattle. I’m not the captain there. So I just enjoy playing, going out and helping the team win. That’s what I’ve always done.”

On the opening 20 minutes:
“We knew they were going to come out with a lot of energy, and we were going to match their energy and try to take the game to them. They were just a little bit sharper with the ball and their possession, but we gradually found our way into the game. I think you’ll see us build as the tournament goes on and we’ll improve with our possession, our quality in the attacking third and creating movements and getting looks in front of goal. But we’re happy with the result tonight. Honduras is not an easy team. I think they’re a team that will give any team problems in this competition, so we’re happy to get the three points.” 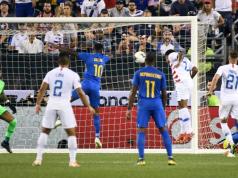 US Men’s Struggle To Beat Curacao, Move Onto Semis 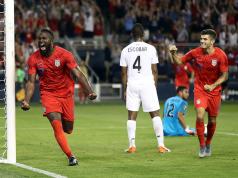 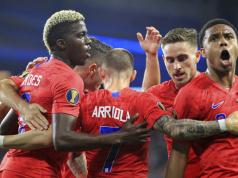 USMNT Do Not Concede Goals in Gold Cup Opener