There was no doubt again this year on who was going to win the Italian League. Juventus were ahead for the majority of the season and fully deserved their 9th straight crown.

Juventus shed a few records this years led by superstar Cristiano Ronaldo. The Portuguese international has scored 31 goals thus far this season (1 more game to play). He reached 50 goals in the league in his first 61 appearances. He was also the first in football history to score 50 goals in Serie A, LaLiga and the Premier League.

The Italian manager, Sarri, won his first Serie A title in his career. Long-time Juve defender Gorgio Chiellini has won his 9th title. He is the only player who has been with the club during the historic stretch where Juventus claim a ninth consecutive domestic title.

Reactions from the champions

Coach Sarri on the title:

“This championship has a particular flavor, certainly a strong one: winning is difficult, this team has been won for many years and; therefore, every year it becomes more difficult. It has been a tiring year, a very long season. We claimed top spot two days in advance and it is thanks to this group, because continuing to find motivation after winning a lot, as I said, is not easy.

The constant in these years has certainly been the club. The president is always close to you, especially in difficult moments and even the managers are constantly present, allowing you to plan everything day by day. Now let’s enjoy this satisfaction, then we’ll think about the Champions League.”

Juventus lost Coppa Italia final to SSC Napoli. Following their ninth consecutive win in the Scudetto, the Italian champions can focus on the UEFA Champions League where they will host Olympique Lyonnais from France. The French club has not played any competitive games in 4 months but going to Turin with one goal advantage. 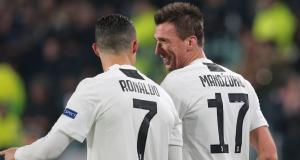