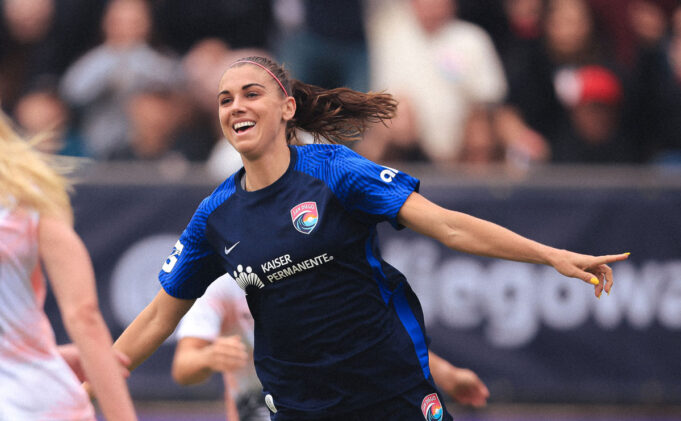 When the NWSL announced that there would be two expansion teams in California they were met with tons of excitement. It was long overdue that professional women’s soccer come back to the state.

Angel City FC in Los Angeles has gotten a lot of attention but the San Diego Wave has built a special environment from top to bottom and it’s showing through their on-field product.

Historically, expansion teams have struggled in their first season but that hasn’t been the case for the Wave. Head coach Casey Stoney has put together an impressive roster that has taken the league by storm.

Through their first 13 games, the Wave sits atop of the NWSL standings with 22 points and a 6-3-4 record. The club won its first three regular season matches scoring seven goals throughout those matches.

Stoney had a vision for this team and it’s become a reality through a mix of veteran faces and newcomers. She’s done a great job of bringing in players that fit her coaching style. It started with signing Abby Dahlkemper and Alex Morgan but through the expansion draft, college draft, and trades San Diego has built an impressive roster.

This team has depth and players who have bought into the philosophy and want to do everything they can to win.

They brought in one of the best goalkeepers in the league in Kailen Sheridan who’s continued her impressive form. They’ve also found a successful pairing at center back with Dahlkemper and rookie Naomi Girma with Christen Westphal and Kristen McNabb as outside backs.

If there was a weak link of this team it’s probably the middle of the field but the midfield has done well controlling the play and creating chances. through the combination of Sofia Jakobsson, Emily van Egmond, Belle Briede, and Taylor Kornieck.

In front of them is rookie Kelsey Turnbow who has had a good season partnering with Alex Morgan. There’s also rookie Amirah Ali who has seen time as a substitute and has a bright future.

Part of Stoney’s game plan is to have her attackers press high up putting pressure on the opposing defenses. It makes it difficult for their opponents to slow the game down and play out of the back. It’s a concept that each forward has bought into and it’s worked so far.

This is a team that works well together, they’ve found the team chemistry so quickly and it’s fun to watch.

The Resurgence of Alex Morgan

Another reason for success has been the recent form of Alex Morgan.

When it comes to club play, Morgan has struggled in recent years but she’s having her best year yet professionally and it’s not really close. The forward has become a leader for this San Diego team both on and off the field.

So far this season she’s played in 10 matches, scoring 11 goals and tallying one assist. Her 11 goals put her atop of the Golden Boot race at this point in the season.

Before this season the most goals Morgan had scored for a club in a single season was nine and that came in 2017 with the Orlando Pride.

Morgan’s U.S. Women’s National Team career seemed like it was in jeopardy before the start of the NWSL season but she’s quickly shown that she’s still a world-class talent.

San Diego plays three of their next five games at home and is looking to get back into the win column after a loss and a tie in their last two.

The good news is that their international players are returning to the club so they’ll be at full strength for the second half of the season.

They’re currently on pace to become the first expansion team to make the playoffs in their inaugural season.

One intriguing matchup to look out for is on August 27 against the Portland Thorns. Right now the Thorns are knocking on the door for first place and have been terrific offensively, tallying an impressive 29 goals this season.

Hopefully, soon sports bettors in California will be able to place bets on both the San Diego Wave and Angel City FC. There are currently two sports betting initiatives on the ballot for November. If it becomes legal, bettors could use sportsbooks like Caesars Sportsbook California, DraftKings, or FanDuel to place bets on the NWSL.