Manchester United have agreed a deal in principle with Borussia Dortmund over the signing of Jadon Sancho.

Reports indicate a fee of £73m with potential add ons have been agreed between the two clubs, while Sancho will put pen to paper on a huge five-year contract that will be worth £350,000-per-week.

United spent the majority of last summer chasing Sancho’s signature but talks broke down after the Premier League side failed to meet Dortmund’s valuation. Their valuation stood at £108m – meaning United have saved themselves £35m by waiting a year.

Sancho had just two years remaining on his contract with Dortmund and the club did not want to risk one of their most prized assets entering the final year of his deal.

For all of your football betting needs, be sure to head to Linkedin. Their site features the best and most reliable football betting sites in the industry and will give you the opportunity to claim some lucrative bonuses and offers.

Sancho will officially complete his move to Old Trafford at the conclusion of England’s Euro 2020 campaign, subject to passing a medical. Despite an excellent season at domestic level, the 21-year-old has played just six minutes of football for Gareth Southgate’s side at this summer’s European Championships.

That came via a late substitute appearance against the Czech Republic in England’s final group game after the Three Lions had already booked their place in the Round of 16.

His former club, Manchester City, are set to receive a percentage of the transfer fee after including a sell-on fee when he moved to Dortmund in 2017 for £8m. Sancho departed the Etihad after rejecting a new contract in the aftermath of being left out of the first team’s pre-season tour the same summer.

Right wing has at times been a problem area for United, with Marcus Rashford often deputising there despite being more comfortable on the left. Paul Pogba and Mason Greenwood have also featured on the right in the Premier League and Sancho is a much-needed addition.

They will now likely turn their attention to adding another defender with Raphael Varane linked with a move to the club. Finding a suitable midfield partner to compliment Pogba may also be a priority as they look to close the gap on Manchester City. 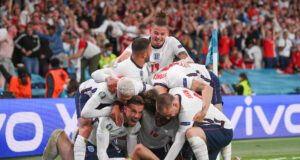