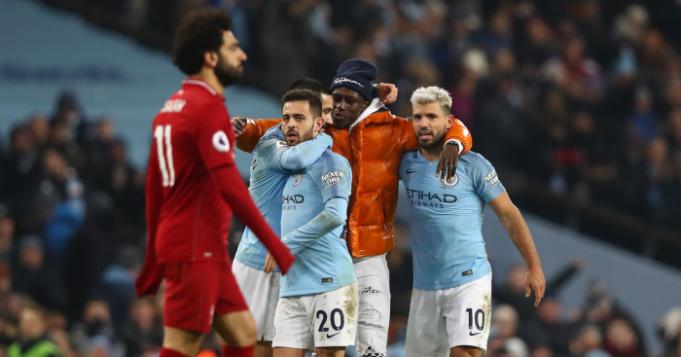 Manchester City and Liverpool offered fans all over the world a great game of football. The atmosphere at the Eithad Stadium was electric and the intensity level of game explained what this Man City – Liverpool was so important.

Man City inflicted Liverpool its first defeat of the season [2-1] and for the first time Liverpool allowed tow goals in one game this season as well. This speaks volume of the performance from the local team. More importantly, the title race just got invigorated with the win as Man City close the gap to four points behind Liverpool.

Coach Guardiola said it was like a final because any other result than a victory would have seriously hindered any of the last City chances to win back-to-back titles. The Spaniard manager comments on the importance of this win:

“Both teams played to win and although it’s not a final… it was a final to us! Winning today – the Premier League is eveyone’s tie again.

Liverpool are still top and it’s enough points to become winners, but at the same time it’s good time for me to congratulate these incredible players what they’ve done over the past 16 months.”

Was Kompany’s challenge a red card?

Liverpool coach Klopp knows his team was closed as they could have scored the opening goal and then leveled up. A red card could have be given to Kompany following a rough challenge on a contested ball with Mo Salah. At the end Sané’s strike was enough for the Citizens to win and Liverpool come back empty.

“It was pretty intense. It had wild moments, both teams obviously have a lot of respect for each other. Let me say it like this, we [have] played better games, but we took the intensity today.

City had a few more moments when they controlled the game, but we had these moments as well – not as long or maybe as often as City. It’s an away game and that’s absolutely OK. And the opponent is City and they are used to it much longer than we are. In the end, you can say post [and] in or post [and] out can make a massive difference. Today we witnessed that.

Sometimes it can be lucky or not unlucky; they blocked twice against us on the line in the second half. Is it mentally stronger to block a ball on the line or not? It’s just luck, you are there or not there. I didn’t see that in the game, to be honest, it is not a surprise City can beat us. No news.

In that situation everybody knows, if Mo can go through, come on, what happens then? I don’t blame anybody, it’s just in a situation like that, make a decision. We got it here last year in the summer, got a red card and nobody thought about it. It was a red card, probably yes.”

Montpellier Regain The Lead as PSG tie vs Bordeaux