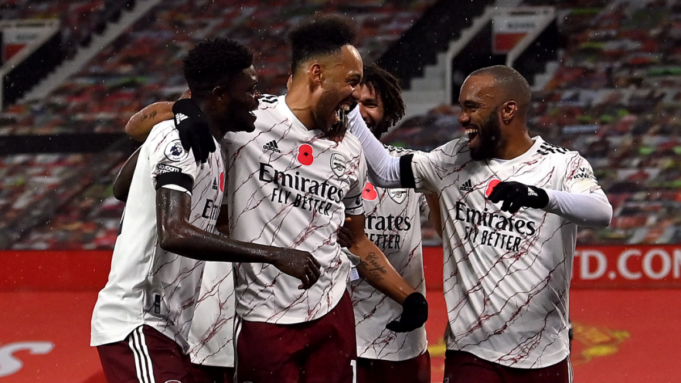 Arsenal bounces back from home loss to Leicester last weekend with a big time win at Old Trafford against Manchester United. The Gunners claimed their fourth win this season and climbed up to 9th place only two points behind second place Tottenham Hotspur.

Aubameyang scored his second goal of the season at the 58th minute. The Gabonese international converted a penalty obtained by Bellerin after Pogba fouled him in the box. It was a very important win for Arsenal which stops the skid after back-to-back losses in the league. Also, this is a big for manager Arteta and his team that is known to struggle against top clubs in top flight.

Coach Arteta on the win:

“We merited the points. I’m really happy that after 14 years without a win, we were able to come and do what we’ve done today. As well I asked the players, ‘Please, let’s be who we are and play with our identity and our style’. I think we did it from the first minute against a really difficult opponent. Obviously they have a lot of quality and we deserved to win the game.

It came back through my mind with what happened against Leicester, a game that we really dominated where we were the better team in the first half. In the second half then, we couldn’t find a way to win the game. Today we’ve done it and we looked very mature. The way we managed the last few minutes is getting better and better. We have people coming off the bench really helping, and individually the players who were required at that stage had a great game.”

Man United is struggling again this season. Last year the club from Manchester struggled for the first third of the season. Currently they lost half of their games in the league (3 out of 6) and sit at a disastrous 15th place. If it is not a crisis yet at the illustrious club it is very close to be one. Definitely one more loss will plunge the historic club into unrest.

“In the first half, we never turned up. The intensity, the tempo wasn’t there, the shape – they were better than us and created a couple of half-decent chances. In the second half, they didn’t look like they were going to score, apart from the penalty. So we played better in the second half but still we have to turn up with more intensity.

There are many reasons. Of course, but it might be a reason when you play well and you think you take your foot off the pedal. But that’s not how it works because this was a big game and they’re a very good team. You have to be absolutely spot-on with everything. When you’re late in the tackle, they get away from you and you give a foul away. We weren’t at the races.”