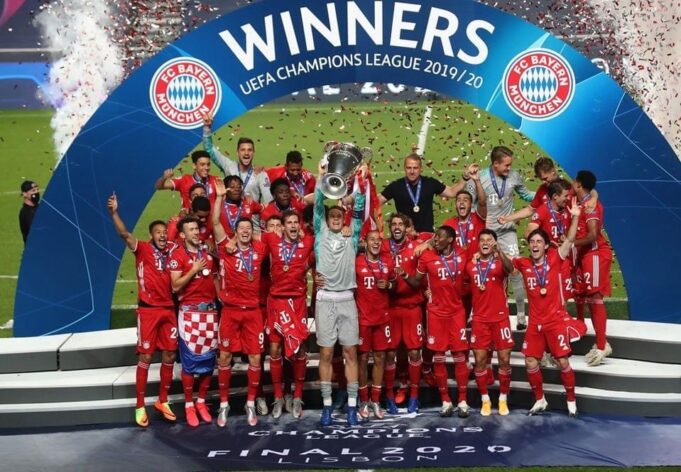 FC Bayern wins 6th Champions League title against Paris Saint-Germain. A goal in the second half from Kingsley Coman, a former PSG player, gave the German champions the continental treble this season with Bundesliga, German Cup and Champions League.

Alongside FC Barcelona, Bayern Munich is the only club with multiple continental trebles (last was in 2013).

Bayern Munich have had a phenomenal season in the Champions League winning all of their 11 games in the competition and scoring over 30 goals. The best player of the year in Lewandowski did not score today but was everywhere eon the pitch. He hit the post in the first half at 0-0.

Bayern Munich joins Liverpool with 6 Champions League trophy. Only AC Milan with 7 and Real Madrid with 13 have more Champions of Europe title.

Reactions from the pitch

“I’m proud of the team. The development over the last ten months has just been sensational. I haven’t given the team a curfew. We should celebrate properly, we’ve earned it. A big thank you to the whole team. There are so many people who’ve helped, it belongs to all of them. The team resolutely went down this path today. We saw Paris have a lot of quality up front but we defended bravely from the front. I think we deserved to win especially because of the second half. We have players that are determined to win and that’s what you need as a coach.”

“I honestly think that if we had scored the first goal, we would have won the game. We have to accept it. It’s not easy, but we can be proud, because we battled well against one of the best teams in the world. We gave everything. We left our hearts on the pitch. We did what we had to to win, and in the end we lacked a clinical streak.

Manuel Neuer was incredible. We might have had more of the ball, but you can’t always ask for more, we also have to have the confidence to have the ball. In spite of that, we had some big chances in the first half. I feel empty, I’ve also given my all. Right now, I’m disappointed, but not too much, because after four trophies and this final, this run in the Champions League, we have every reason to be proud.”

Paris Saint-Germain glorious night will have to wait. The French champions will try to get back to the Final next year in Istanbul.

Bayern Coach – Christian Nerlinger: We could have had a draw