The 2012 preseason will get underway early for a pair of Real Salt Lake veterans, as midfielder Kyle Beckerman and goalkeeper Nick Rimando have been tabbed by U.S. Men’s National Team Head Coach Jurgen Klinsmann to participate in the squad’s annual January camp, taking place from January 3-26 in Arizona, California and Panama. In addition to RSL’s on-field duo, Assistant Coach Jeff Cassar will join Klinsmann’s staff for a portion of the camp, a group that also includes Real Salt Lake – Arizona Academy Technical Director Martin Vasquez.

The U.S. squad will cap off the camp with a pair of friendlies, hosting Venezuela on Jan. 21 at the University of Phoenix Stadium in Glendale, Ariz. (TICKETS) before traveling to take on Panama at the Estadio Rommel Fernandez in Panama City four days later. Fans can follow both games live on ussoccer.com’s MatchTracker and Twitter @ussoccer.

The players and staff will report to Phoenix, Ariz., on Jan. 3 to begin training before moving to U.S. Soccer’s National Training Center at The Home Depot Center in Carson, Calif., to continue training from Jan. 13-20. After 18 days of training, the squad will switch into game mode, returning to Arizona to finalize preparations for Venezuela before heading south to face CONCACAF rival Panama.

Click here for quotes from Klinsmann on his first January USMNT camp.

Courtesy of his mid-year return to the USMNT fold after the appointment of Klinsmann in July, Beckerman will be relied upon to help set the tone for the 20-man group during the upcoming camp and friendlies. The RSL captain, who spent two weeks training with German Bundesliga side FC Kaiserslautern in November following the end of RSL’s campaign, has earned starting nods in five of the USA’s seven games under Klinsmann, including the squad’s most recent contests at France and Slovenia last month. The 29-year-old Beckerman has collected 18 “caps” for the U.S. Senior team and will be making his fourth January camp appearance in the last six years (2007, 2008, 2010 & 2012). The Crofton, Md. will be the fourth-most-capped player in camp, behind only Benny Feilhaber (38), Heath Pearce (33) and Ricardo Clark (32).

Rimando is also no stranger to the USMNT’s January gatherings, as the upcoming stint will mark his third consecutive year as part of the camp collective. Rimando will serve as the elder statesman of the gathering for a second straight year, as the 32-year-old netminder will anchor a goalkeeping corps that also includes up-and-comers Bill Hamid (21) and Sean Johnson (22). The 12-year MLS veteran was called into the U.S. Senior team side on three occasions during 2011, most recently in October in advance of friendlies against Honduras and Ecuador. Rimando’s last USMNT appearance, a spotless 45-minute starting spell on Jan. 22 against Chile, marked the Southern California native’s fifth cap for the Red, White & Blue. 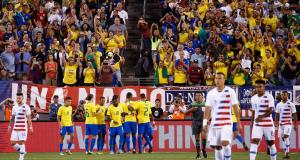 Why the US Soccer Men’s National Team lacks support