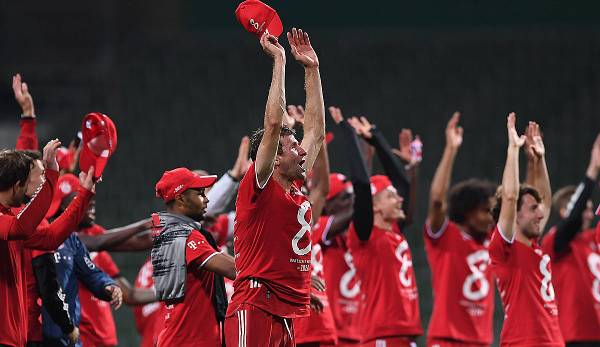 Meister Bayern Munich who won their 8th straight title and 10 in the 12 Bundesliga seasons. The Bavarians led by Lewandowski who scored his 31st goal of the season, won at Werder Bremen to clinch the title with two more games to be played.

“Credit to the team! The way we’ve played in recent months – you feel the passion, the character, the joy of playing, the fighting spirit. Bremen didn’t want to go for it too much at the start but then they plucked up their courage when we went a man down. There’s no criticism today. You have to emphasise how the team have achieved this.

You never succeed alone, only together. It’s a delight for me to be involved. The group personify the confidence of ‘Mia san Mia’. The lads possess enormous quality and the coaching staff trust them. This is Bayern Munich, the targets are always high. We’ve reached the first one now, the next one is the cup. You can’t plan the Champions League. It will always just be one game. We need to be in top shape when the time comes.”

“Hansi Flick, his coaching staff and the team have had a brilliant second half of the season despite these difficult circumstances, not only in terms of our victories, the points we’ve taken and the many goals, but also to our way of playing. We want to give our fans trophies and at the same time inspire them with attacking football. That’s been achieved. FC Bayern have deservedly won the league for the eighth time in a row.”

Lewandowski and Muller control the league

The Polish international netted 31 times in 32 games this season and lead the standings by a margin of six goals over second place Timo Werner (25 goals). In the assist department, Thomas Müller dominates the league with 20 deliveries, that is four more than second place Sancho. By the way the Borussia Dortmund and England international ranks third in the scoring list with 17 goals.

“We’re German champions. It’s obviously a bit difficult celebrating without fans. That certain something extra, that passion is lacking. We’re nevertheless very happy. It’s not been an easy season, we’ve fought long for the title. I hope we get to celebrate with the fans in the stadium soon. In the first half, Werder played rather defensively but played well. In the second half we needed to score to make it a bit easier. We’ve shown we’re the best team in Germany and we want to play even better in the Champions League.”